The Need to Measure Sharpness

CATRA has been involved in the testing of performance characteristics of blades for over 60 years. In particular, the problems of evaluating the cutting ability have been studied using various manual and mechanical methods. This knowledge has enabled CATRA to design an automatic sharpness test machine that meets the requirements of consumers, manufacturers and standards’ organisations. The need for such a cutting performance test is internationally agreed:

The machine system answers the questions “How sharp is it?” and “How long will the sharpness last?”.

Starting work in 1988, a group of specialists from various countries have developed a standard within the ISO Standards Committee for articles in contact with food. It specifies the detailed test method and sharpness specification for knives for the preparation of food. However, the test is also ideally suited to other types of blades, including:

Not only can this system test knives, it can be used to test knife and blade sharpeners, by a clever system of testing and sharpening (see below).

The system can also be used to measure the ease and abrasiveness of cutting various papers. By using standard blades and test cards made from the paper samples under investigation the machine will give very accurate performance figures, enabling paper processors to evaluate their cutting processes.

The principle of the test is simple. The blade is mounted in a position with the edge vertical and a pack of specially developed synthetic paper is lowered on to it. By oscillating the blade back and forth the blade cuts into the paper; the depth of the cut being the measurement of sharpness.  The test media is loaded with 5% silica, which has a mild wearing effect on the blade edge. By repeating the back and forth motion further cuts are made, which wears the cutting edge. The measurement of cut depth at each subsequent stroke can then be plotted to produce a wear curve for each blade tested. The test produces two indications:

The test is designed for straight or nearly straight blades.  However, specially modified machinery can be provided for circular or curved blades.

The Automatic Edge Tester (AET) Machine and control software is designed to operate on the industrial quality PC system built in to the equipment. The operating software interlinks with Microsoft Excel and Access to provide data analysis, reporting and database facilities and is compatible with Windows 7, 8 and 10.  The software is optionally available with on screen information and reports in English, German, French. Spanish and Japanese.

The Semi-Automatic Edge Tester (SAET) Machine is controlled a programmable logic controller which manages all functions, measures the data and displays the resulting ICP and TCC.  Data output can be captured with an optional interface.

Specially formulated and quality controlled card with silica content of 5% supplied in:

This is a complex test paper and is critical to the accuracy of the test system.

The general arrangement of the CATRA Cutting Test Machine is as shown in the schematic below.  The machine comprises of a rigid, metal-fabricated frame (Base & Cantilever) to which all major sub-assemblies are mounted. It is configured such that the blade to be tested is fixed, edge upwards, on a reciprocating table mounted onto the base of the machine whilst the test media (card) is applied, under load, onto the knife edge from the cantilever.

The blade in testing is clamped into a self-centring vice, where the jaw design compensates for blade thickness and taper in two directions. Hence, the centre line of any blade is always to the same datum. Adjustable pillars support the blade and are used to set the attitude of the test portion of the cutting edge to as near level as possible. The design also means that any length of blade can be accommodated.

The vice is mounted on a horizontal low friction slide which during the test is free to allow lateral float of the blade whilst cutting through the media, and returns to the fixed datum position for the beginning of each new cutting block. This slide is mounted onto a horizontal table, which facilitates the longitudinal motion of the blade for cutting strokes. Drive to the table, and therefore the blade, is via a servo motor and lead screw arrangement.  This allows precise positional and speed control over all or any part of the table’s stroke. Therefore, the test is carried out within a defined speed and motion envelope.

The test media (strips of card which are pneumatically clamped during cutting) is mounted in a holder with a capacity of 50 mm cutting thickness on a vertical low friction slide. The test load is applied vertically to the slide and therefore the media, by a calibrated weight.  The method of lowering the media to the blade, together with the vice jaw design allows a full range of blade widths to be accommodated.  Measurement of the amount of the card cut is achieved electronically.  At the beginning of each new test and after each cut through the ‘block’ of media, the card is fed forward automatically by a pneumatic indexing system.

Operation of the machine is totally automatic (not on semi-automatic version) except for the loading, setting up of the blade and replenishing the packs of cutting media. The machine functions are controlled by a microprocessor based unit, which switches electro-pneumatic devices and controls the motor under instruction of the resident program.  This unit is in turn a slave to a host computer.  The function of the PC is to provide the operator interface at the keyboard and to manage the test data, parameters, generate test reports and allow rapid comparison of current test data with the full database of previous reports. Test reports are generated in Microsoft Excel and the data is stored in an Access database for easy future comparison and retrieval. 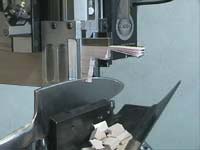 The flexibility of automatic machine design and software allows the user to ‘develop’ their own testing programmes (not manual version). Using the purpose written software specially developed ‘in-house’ at CATRA, the machine is capable of carrying out fully automatic cutting and wear tests on a blade with very little operator intervention. Results are stored onto disk ready for analysis using the supplied software or import to other proprietary data analysis software. The test allows the blade to cut through a maximum distance 50 mm of card whilst the controlling PC logs the depth of card cut per cycle and the number of cycles. These tests can be repeated any number of times and displayed in tabular and graphical formats, as well as presenting the results in any format required, including the initial cutting performance (ICP) and the edge retention properties (TCC) as specified in the ISO Standard.

The measurement of sharpness and cutting edge durability is not an absolute attribute such as weight or length, as there are a considerable number of variables in the analysis.  These variables are often outside of the accurate control of both CATRA and users of these machines, which means the level of absolute accuracy is relatively low in comparison with measuring a length with a micrometre, for example. This system should therefore be regarded as a comparator for relative sharpness rather than for absolute measurements. If for example it is required to compare knives it is better to test all samples on the same machine in the one location over a relatively short time period, this then increases the accuracy of the results.

Optionally, a single or 3 axis load measuring platform can be mounted below the blade vice to enable measurement of some or all cutting forces. This is useful as an instrument to aid in the development of knife edges for example in the minimising of cutting forces. The additional load measuring package includes a load cell, all cables, computer interfaces and integrated software.

The semi-automatic machine is a lower cost version, with no programmable functions, it has fixed stroke lengths, speed and test load. It can export the test data via an optional interface to Microsoft Excel spread sheet for analysis.

To test a blade or knife sharpener, the system can be operated in a different mode. By taking a particular standard knife blade and testing it on the machine up to a set number of cuts, then removing it from the machine, carrying out a resharpening operation using the sharpening unit under test and then returning the knife to the test machine, the performance of the sharpener can be gauged. It is normal for the above cycle to be repeated a number of times to evaluate the on going efficiency of the sharpening or honing device.

The technique can be used for measuring sharpening performance of the following devices and processes:-

This test system is extremely sensitive when measuring the cutting edge “softening” effect which is created by overheating the edge by aggressive dry power sharpening techniques and machines.

and of course CATRA, we have 2, which have tested knives for over 2000 companies worldwide.

Or CATRA offers full independent and confidential testing services based on these machines.