Designed and Manufactured by CATRA 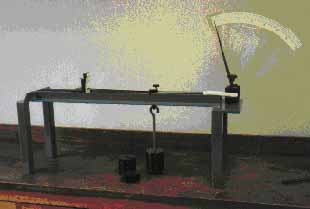 The equipment is generally as shown in figure right, and complies with the arrangement as described in EN28442-2. To the right hand end of the machine is a pivoting clamp to hold the knife handle. This clamp has an indicating pointer to measure any permanent deformation. Force to lift the test load is applied manually, via a lever, through this pivot. 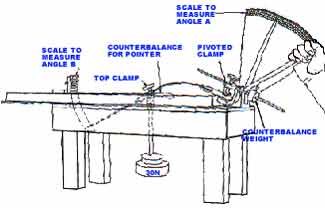 The test load applied to the knife is determined by a calibrated weight (attached to the tip of the blade via a clamping device and hook), which should just be raised from the bench surface by the force applied by the operator at the lever. A second scale, which is adjustable along the frame for component length, is positioned so as to read any permanent set at the tip end. The total permanent set is the combination of set measured at both scales.