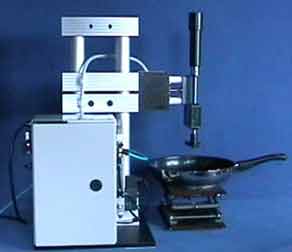 The scratch test is based on applying a hard pointed object (varies dependant on the test involved) under a fixed load and a controlled speed. After which the resultant damage to the surface can be assessed.

The abrasion test consists of oscillating an specified abrasive cleaning pad (such as a Scotch-Brite pad) along the non-stick surface again under constant load and speed conditions usually with a detergent solution added to the surface. Any surface damage or removal of coating can the be easily assessed.